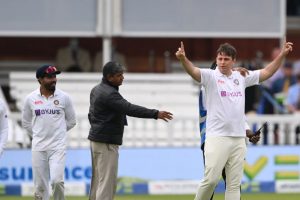 There was a slight delay after lunch on the third day of the second Test between England and India at Lord's after a pitch invader entered the field.

The fan was wearing an Indian shirt with 'Jarvo 69' on the back and he lined up as though he was part of their team.

Security came on to escort him off the field while the fan unsuccessfully attempted to convince them he was a player, pointing at the India badge on his shirt.

While on commentary for Sky Sports, former England captains Michael Atherton and Andrew Strauss could not contain their laughter, with Atherton joking: "He didn't look like he could come rushing in and send it down at 90mph it must be said."

"There was a disdain on his face as the stewards tried to escort him off", added Strauss.

Indian bowler Mohammed Siraj was also seen laughing as the fan was removed from the field.

Reacting on Twitter, one supporter wrote: "Fair play, saw his chance and took it"

"Let him replace Rahane," joked another. "Will still contribute more with the bat."

"Loving the new rules brought in to spice up test cricket, England electing to use their 10 over 'Jarvo' sub fielder powerplay before the new ball and get him on the field in place of Jadeja."

"Probably the most creative way I've seen someone get a lifetime ban from Lord's tbf" wrote another.

After play eventually got back underway after lunch, India managed to get an important breakthrough, with Siraj getting Jonny Bairstow caught at slip after he gloved a short ball.

Bairstow had shared a 121-run partnership with captain Joe Root as the pair looked to help England chase down India's first innings lead.

After Bairstow was dismissed, Root went on to reach his hundred, his 22nd in Test match cricket.

It was also Root's 38th century for England in all formats, meaning he has now equalled the record held by Sir Alastair Cook for the most hundreds for England.