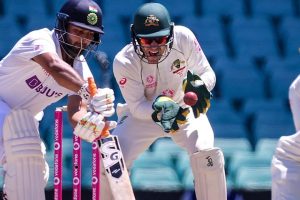 Tim Paine had some headaches in the opening session of day five of the third Test as India’s batsmen and his own hands hurt Australia.

Cheteshwar Pujara and Rishabh Pant blunted the Aussie attack on Monday morning as they tried to stave off defeat following the early loss of captain Ajinkya Rahane.

Pujara defended resolutely while Pant counterattacked his way to 73 as they guided India to 3/206 at lunch, keeping the tourists’ hopes of a miracle win or draw alive.

Paine will have been ruing his own missed opportunities to break the partnership as he dropped two tough chances off the bowling of Nathan Lyon. The Australian off-spinner loves bowling to left-landers and twice he managed to rip the ball away from Pant and catch the outside edge, only for the ball to hit Paine’s gloves and bounce away.

Having just arrived at the crease, Pant was on three when he prodded forward but was fortunate to get a big enough deflection that the ball clipped the end of Paine’s fingers rather than nestling into the middle of his gloves.

It was the same story after Pant had climbed into Lyon, hitting him for successive sixes as he neared his half century. Shortly after raising his bat another vicious off-break caught the edge — although the deflection wasn’t as great this time — only for the opportunity to once again slip through Paine’s hands.

According to CricViz, it’s the first time since Paine returned to the Test team in 2017 he has dropped two catches in an innings.

They were both tough chances — the first one in particular — but Paine prides himself on his work standing up to the stumps and will have been disappointed he didn’t snaffle at least one of them.

Paine was having a day to forget behind the stumps.Source:AFP

Paine then celebrated gleefully when he thought Pujara had edged Lyon to Steve Smith at first clip, but he was the only one cheering because the captain’s teammates knew the ball had bounced well short.

Commentating for Fox Sports, former England seamer Isa Guha said of Paine: “There’s a lot on his mind at the moment

“He’s dropped a couple of catches

“Managing his bowlers, where is he going to get a wicket from.”

Former Indian opener Aakash Chopra referenced Paine’s famous banter about Pant babysitting his children during India’s last tour of Australia when taking a cheeky jab at the wicketkeeper on Twitter.

“Not sure if Pant will trust Paine with the babysitting duties,” Chopra wrote. “Paine drops Pant off Lyon. Pant hits Lyon out of the attack. PaineFul.”

Pant dropped some simple chances with the gloves in Australia’s first innings and plenty on social media suggested Paine was simply returning the favour.