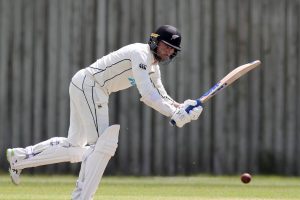 New Zealand cricket captain Kane Williamson has confirmed Devon Conway will make his debut opening the batting for the Black Caps at Lord’s tonight in the first test against England.

Conway’s earned the right after an avalanche of domestic runs, and success in the international limited overs formats.

“A really exciting opportunity for Devon obviously he’s been involved with the team over the last year in the white ball formats and gone extremely well and gets his opportunity to debut at the home of cricket,” Williamson said.

Williamson says they have narrowed the squad down to 12 – he has confirmed Colin de Grandhomme’s fit and ready to bowl, so he could make his return after an injury-hampered home summer.

Conway replaces Tom Blundell who opened in the side’s last test against Pakistan in January. Daryl Mitchell also drops out from that XI replaced by de Grandhomme.

Conway made every post a winner in his first international season over the New Zealand summer.

Conway’s ODI form was just as dominant as he plundered 225 runs at 75 in the three-game series against Bangladesh, including his maiden international century at the Basin Reserve in March.

He became eligible to play for New Zealand last August, making his Twenty20 debut in November against the West Indies, and has since played 14 T20s and three ODIs for the Black Caps.

Conway moved to New Zealand from South Africa in 2017 and made an impact for Wellington with an unbeaten double century in a Plunket Shield against Otago in his second season.

In October 2019, the question of whether he would eventually become a Black Cap was all but answered when he scored 327 not out against Canterbury, New Zealand’s sixth-highest first-class inning.

Matt Henry, who looks the likely 12th man option for the first test, was the last New Zealander to make their test debut at Lord’s. He had a strong outing by taking the wicket of England captain Alastair Cook in his third over before taking 4-93 in the first innings in the 2015 defeat.