Home » Сricket » Black Caps to face a test of technique and courage: Vaughan

Black Caps to face a test of technique and courage: Vaughan

The Australians are set to field an unchanged side for the third straight Test, when the series opener against the Black Caps begins on Thursday in Perth. This means speed kings Mitchell Starc, Pat Cummins and Josh Hazlewood will have the chance to unleash fury on an Optus Stadium pitch tipped to offer speed and bounce and potentially, as the match unfolds, treacherous cracks, with temperatures set to climb as high as 50 degrees inside the stadium. 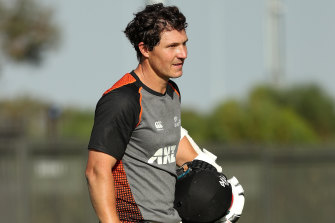 Michael Vaughan says BJ Watling could well be the best wicketkeeper-batsman in Test cricket at the moment but even the best will be tested by Australia’s pace attack.Credit:Getty Images

Vaughan was in New Zealand recently when the Black Caps claimed a 1-0 series win over England on docile decks. Those conditions will leave the tourists with plenty to adjust to in Australia, considering they have not played a warm-up match.

"I would say on some of those New Zealand wickets your courage doesn't generally get tested whereas against this lot here, your courage will certainly get tested," he told The Age and Sydney Morning Herald.

"I think this bouncing ball here will really test them. BJ Watling, you can probably argue is the best wicketkeeper-batsman in Test cricket now, but against this trio of Australian quicks, I don't care who you are, if those three are right, they are going to make it very difficult for you and they test your courage, your technique, your mindset."

The Kiwis will hope for a good start by openers Tom Latham, averaging 44 in 47 Tests, and Jeet Raval, averaging 32.29 in 22 Tests, but much will depend on batting kingpins Kane Williamson and Ross Taylor and Watling. There isn't much that hasn't been said about Williamson, rated behind only Virat Kohli and Steve Smith on the world rankings, while Taylor averages 49.82 in nine Tests against Australia, although this was inflated by his match-saving 290 at the WACA four years ago.

Ian Smith, the Black Caps' gloveman in their only series win on these shores, in 1985-86, said he hoped the "underdog" feel of Williamson's team did not mean they played in that manner.

"But that's more New Zealand's psyche than anything else. I do believe, ability-wise, I think they are ready."

Vaughan backed Williamson, with two centuries in seven Tests against Australia, to handle the bounce but said the No.3 batsman may have to make a tweak.

"He [Williamson] is a wonderful player. He generally likes to duck and sway. There comes a time against these Aussies when you will have to play that pull shot and take them on and try and get on the front foot – he has got that in his locker. He is up there with the best," he said.

Those close to Williamson say his greatest strength – like Kohli and Smith – is focusing on the delivery at hand, having banished any memory of the previous delivery, whether good or bad.

The Black Caps have won eight of their past 10 series and are ranked three spots higher than Australia. However, they have won only three of 31 Tests here, and none since 2011.