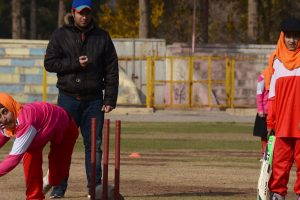 The chairman of the Afghanistan Cricket Board, Azizullah Fazli, has claimed that women will be able to play the sport, despite claims to the contrary by the Taliban.

In mid-August, the Taliban retook Afghanistan's capital city Kabul and seized control of the country, following the withdrawal of American troops.

During the last period of Taliban rule, women were not allowed access to education and the idea of playing sport was virtually inconceivable.

The ACB announced last November that they intended to award central contracts to 25 women cricketers and they are required by the ICC to have a national women's team in order to retain their full member status.

Earlier this month, the deputy head of the Taliban's Cultural Commission Ahmadullah Wasiq told SBS News that women would not be allowed to play cricket as it is "not necessary".

He said: "I don't think women will be allowed to play cricket because it is not necessary that women should play cricket.

"In cricket, they might face a situation where their face and body will not be covered. Islam does not allow women to be seen like this.

"It is the media era, and there will be photos and videos, and then people watch it. Islam and the Islamic Emirate do not allow women to play cricket or play the kind of sports where they get exposed."

In response, Cricket Australia said they would cancel a scheduled one-off Test match against Afghanistan if women's cricket "will not be supported in Afghanistan".

Now Fazli, who was appointed chairman in August, has appeared to contradict the Taliban's stance, telling SBS Radio Pashto : "We will give you our clear position on how we will allow women to play cricket.

"Very soon, we will give you good news on how we will proceed."

Fazli also insisted that all 25 members of Afghanistan's women's team are "safe" and still in the country.

"The women cricket coach Diana Barakzai and her players are all safe and living in their home country," he added.

"Many countries have asked them to leave Afghanistan, but they have not left Afghanistan, and at the moment, they are in their places."