The spectacular flop by Australia A's batsmen thwarted selectors' plans to use the tour game as an audition for the first Test, leaving contenders with a nervous wait ahead of Thursday's announcement.

Despite nearly four rounds of the Shield and a tour game featuring the best-performed batsmen in state ranks, no player emerged out of the pack demanding inclusion. 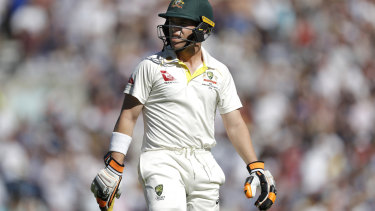 Marcus Harris is in a battle with Joe Burns and Usman Khawaja for a spot in the Australian Test side.Credit:Getty Images

The top seven in the Australia A made a combined total of just 89 runs, 49 of which were made by Cameron Bancroft, who was a last-minute inclusion in the side due to Nic Maddinson's withdrawal.

Joe Burns, Marcus Harris and Usman Khawaja were all vying to open with David Warner.

Of the trio, Harris, the incumbent, has recorded the most runs in the Shield with 266 at 53 but had the advantage of padding up on a Junction Oval highway.

Selectors would have been weighing up the value of his runs against Burns' average of 40 on a lively Gabba pitch which has proven difficult for batting.

There would be few begrudging Burns the chance with many considering him unlucky not to have worn the baggy green on more occasions.

The Queenslander was left out of the Ashes after making 180 in the last Test before the series, then was diagnosed with fatigue disorder weeks out from the trial game.

If Burns is preferred, selectors could point to his overall Test record to justify picking him ahead of Harris, who is coming off a lean Ashes series. From 16 Tests, he has made four centuries and averaged 40 compared to Harris's 24 after nine Tests – albeit against stronger opposition.

Khawaja has an excellent record at home and has also enjoyed success opening but selectors would find it difficult to explain promoting a player with only 65 first-class runs from six innings this season.

Bancroft swooped late to make the Ashes squad with 93 in a trial match, and was again the best-performed player in the first innings of the "A" game but his place in the pecking order was evident in him batting at six as a late inclusion.

Middle-order contenders Travis Head and Will Pucovski have compiled almost identical first-class numbers this season but the former could consider himself extremely stiff if overlooked given he is Australia's leading run-scorer of the Tim Paine era.

The South Australian, who boasts a Test average of 42, was surprisingly omitted for the last game of the Ashes when selectors opted to include all-rounder Mitchell Marsh as an extra seam-bowling option.

There is a big boom on Pucovski, who has the backing of former greats Ricky Ponting and Shane Warne to make his debut at the Gabba. They say now is the right time to blood a youngster whom they feel has the makings to be a long-term Test batsman.

Pucovsi started the season with a ton at the Junction but the runs have dried up with scores of two, zero, three, seven and five from his past five innings.